How To: Creating Your Own Animated Threat Map

One day, I was challenged to create a “live” threat map from our existing SIEM data for display on our SOC wall screens.

Never one to shrink from a challenge, I accepted. But I know practically no JavaScript, I’m not a web developer by any stretch of the imagination, and I had nowhere to start except this project, which is a joke threat map that plots random attacks using random geographical coordinates.

So how did I manage to create something like this… 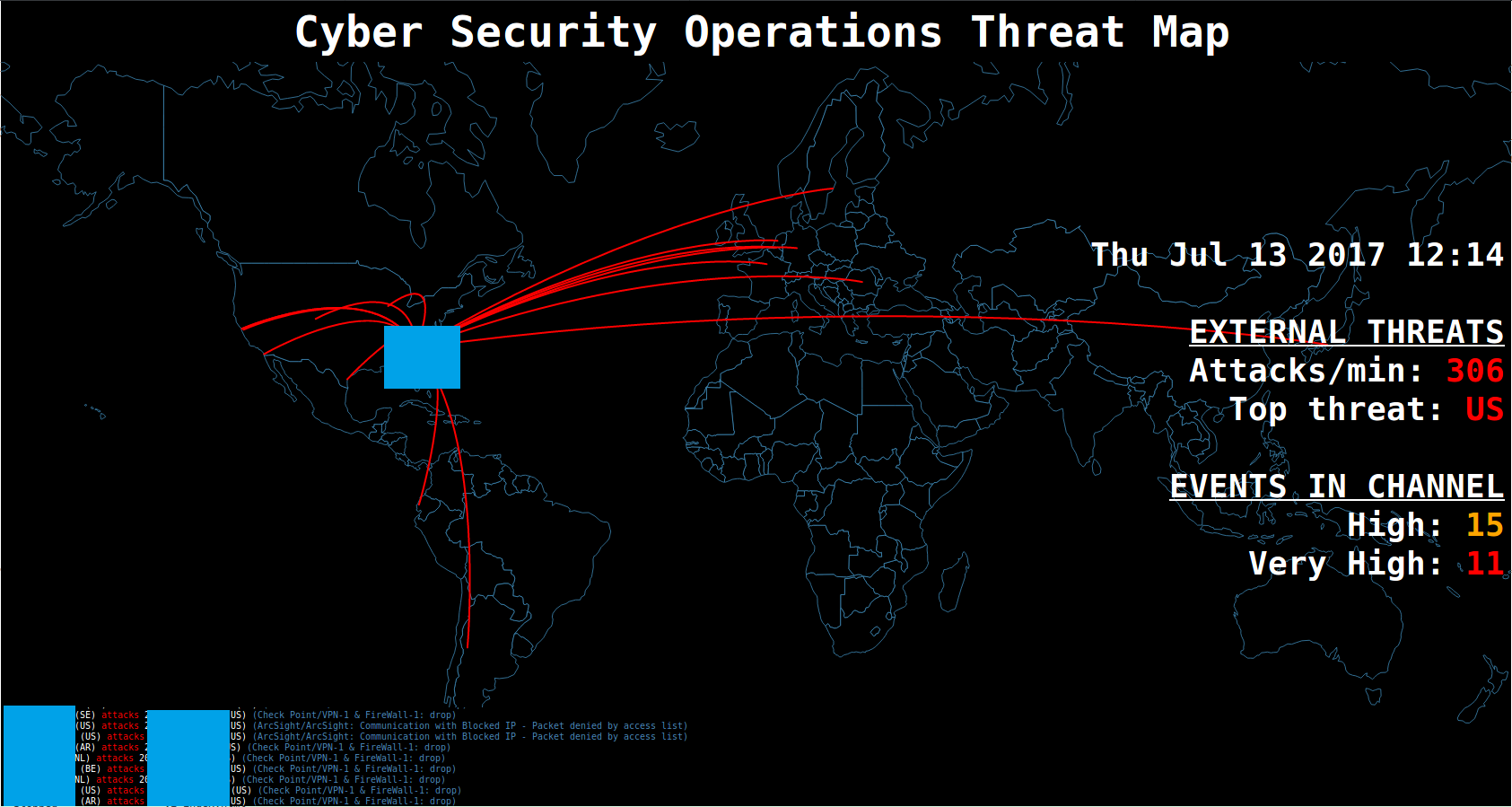 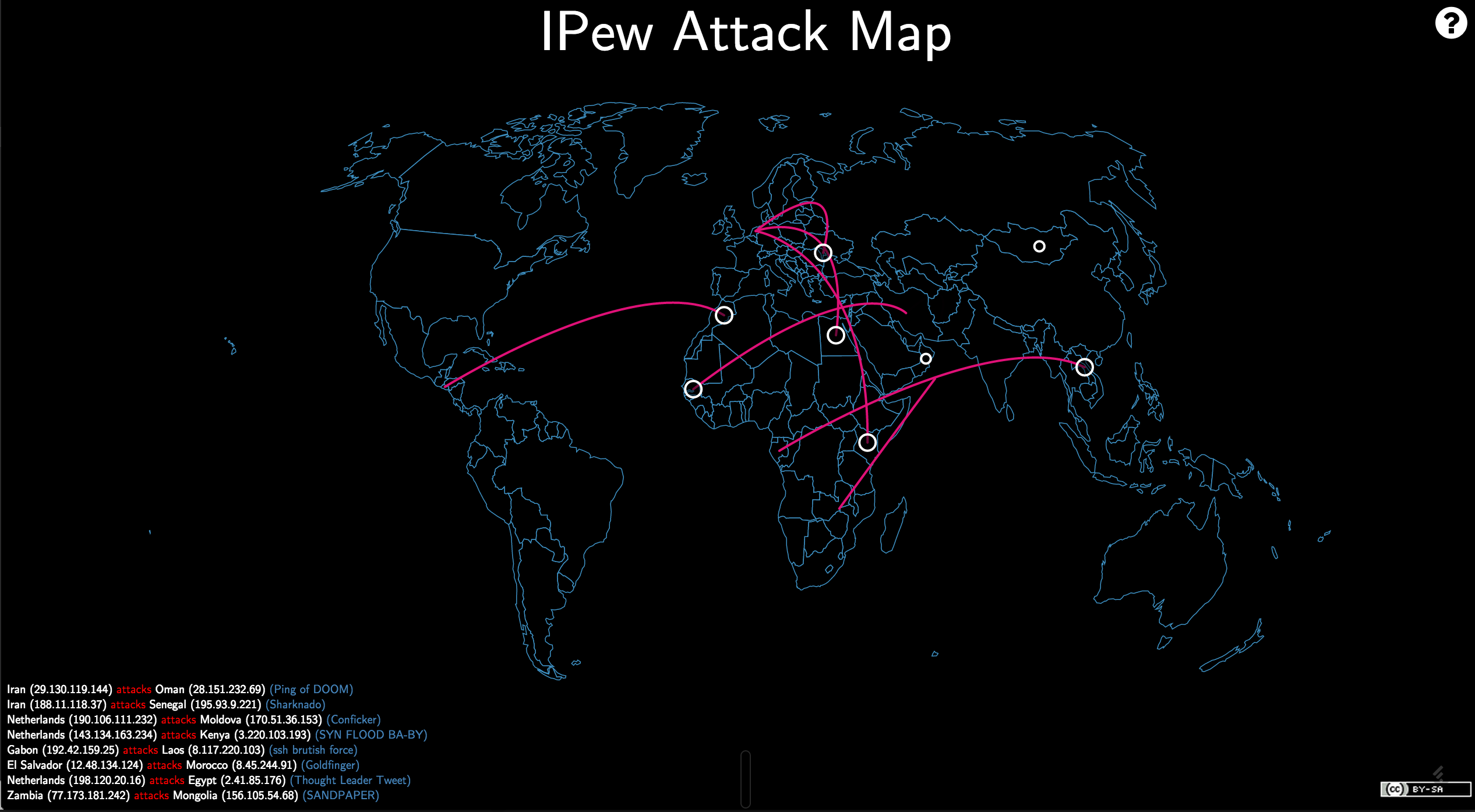 First, get the data

In short, I needed:


After writing the filter and creating the query, I made note of the Resource ID for the query in the Inspect/Edit pane under the General tab.

Then, I came up with the following code:

Now that I have the data from the SIEM, I need to grab the latitude and longitude for the IP addresses so they can be mapped. I accomplished this using pygeoip and MaxMind’s GeoLiteCity database.

This was relatively simple Python code that read the source and destination IPs from the results of the above code, and spit out latitude and longitude for each IP.
I also grabbed the two-letter country code from the database. I looked up the coordinates for my location and used them as a default in the event that the database didn’t contain a mapping for an IP.

I output a header containing all the field names, and then ran through all the data grabbed from the SIEM. I looked up the coordinates and country code for each IP, and enriched each line from the SIEM with this data, and sent all of this to a file.

Then, I moved that file into the root directory for the web page, ensuring that the freshest data is in place to be read.

Next, I set up a script to do this continuously, and had systemd start it automatically at boot, and ensure it’s restarted if it dies.

NOTE: You may be noticing at this point that there’s all sorts of issues with this approach, the largest being that I may not be able to guarantee that all the data gets plotted.

Threat maps like this aren’t meant to be 100% accurate, up-to-the-second portrayals of threats. They’re not useful for analysis or incident response (though some of the data collected might be). They’re meant to look impressive. They’re there to dazzle visitors to the floor, and to give some general sense of what’s going on at the perimeter: a gut-feeling activity gauge that’s slightly more amusing than a bar chart. So if we miss a few hundred events here and there, no harm done.

We’ve got the data, now what?

Now, we have to read the data in via the JavaScript used in the iPew project.

I started by finding the code in index.html responsible for plotting the source and destination IPs on the map. This wasn’t too hard. There are several var lines dealing with this:

…and so forth. It seems the code is using srclat, sclong, etc. to store the values that’ll be plotted. I can work with that.

So, knowing no JavaScript, I looked around for an example of reading in data from a file. Luckily, there’s an example in index.html itself:

I adapted this to read in the data I was putting in a file every minute:

and then, I set up a loop to loop through each line:

This allows me to refer to each element in the line by the field names I gave in the header of the data file. So, for example, I can assign the variable srclat by referring to the field name and variable: srclat=cur.slat (where slat is the field name I used for the source IP latitude).

Once I could grab data from the SIEM, and ingest it into the JavaScript being used by iPew, the rest was a relatively easy effort in code cleanup, presentation preference, etc. I had to introduce a delay at the end where the original code looped, to account for times when the code reads in a new data file.

I also looked up some quick JavaScript to get the current date and time in a readable format, and found a container to display it in, along with data from another ArcSight query I set up to get the contents of a particular channel and parse them by severity level, so I could have a quick way to glance at the map and see how many important events are in that channel.

Like I said, there wasn’t too much to worry about here, efficiency-wise, so if I wasted CPU cycles reading in another couple of numbers every minute, I wasn’t too concerned.